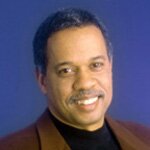 Journalist/Author
JUAN WILLIAMS is senior correspondent for National Public Radio and a political analyst for television's Fox News. In addition to a 23-year career as a reporter and a columnist for the Washington Post, he is the author of the critically acclaimed biography Thurgood Marshall: American Revolutionary, the best-selling Eyes on the Prize: America's Civil Rights Years 1954-1965, the companion volume to the award-winning PBS Series, and his most recent publication, Enough, among other books. During his 21-year career at the Washington Post, Juan Williams served as an editorial writer, op-ed columnist, and a White House correspondent. He has won an Emmy award for TV documentary writing and received widespread critical acclaim for a series of documentaries including Politics-The New Black Power. He lives in Washington, DC with his wife, Delise Williams.