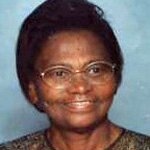 Scientist
DR. CURLA S. WALTERS is Professor Emeritus of the Department of Medicine at Howard University since January 1, 2005, and was were formerly director of the Immunology and Flow Cytometry Unit in the Department of Medicine. She was born in Jamaica, West Indies, and later immigrated to the United States to further her studies. She attended Andrews University, receiving a Bachelor of Arts in Biology. At Howard University she received a Master of Arts in Microbiology. She obtained a Ph. D. From Georgetown University in Microbiology and Immunology. Shortly thereafter, Dr. Walters received a fellowship from the American Association of University Women to continue her studies at the World Famous Karolinska Institute in Sweden, she later completed her postdoctoral tenure at the University of Colorado, Denver, and joined the faculty there in the Division of Clinical Immunology as instructor and later as assistant professor. In 1975, Dr Walters returned to Howard University and joined the faculty in the Department of Medicine as associate professor. She also served at similar rank in Departments of Microbiology and Dermatology and as graduate associate professor. Faculties, graduate students, residents alike have lauded her for her excellent teaching proficiency and techniques. Dr Curla Walters was also a dedicated participant in the development of the new integrated medical school curriculum for which she was recognized. She served on several committees in the College of Medicine, including the Admissions Committee, Nominating Committee, Grievance Committee and Sabbatical Leave Committee. Over the years, Dr Walters has successfully competed for research grants and maintained a very active and productive research program. She has successfully guided several PH.D and Master's Degree candidates in their research projects. These individuals are following successful careers in their chosen fields. She has 27 publications in peer reviewed journals and numerous presentations nationally and internationally. Dr Walters has had a long and distinguished professional career and life devoted to excellence in teaching research and training and serving others. Her philosophy of life is ' if you are successful, always turn around and bring someone with you' ; thus she often opened up her home to medical students in search of housing. She has served as mentor for University students as well as for high school students. She has also been involved for several years with programs for feeding the homeless. She was a founding member of the Jamaica Volunteers Association and a board member of the George E Peters Elementary School for eight years. As a member of the American Association of Immunology Access Committee, she coordinated the minority high school students' program, exposing students to the field of immunology. Dr Walters is single and has two granddaughters, the children of her deceased adopted son, Orville Sharpe. She is an active member of the First Seventh-day Adventist Church of Washington, DC, where she has served faithfully served as head elder for many years.