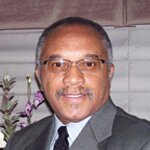 1968 Olympic Gold Medialist/Educator
TOMMIE SMITH is an African American former track & field athlete and wide receiver for the Cincinnati Bengals of the American Football League. His historic achievements make him a nationally and internationally distinguished figure in African American history. He is the only man in the history of track and field to hold eleven world records simultaneously. Tommie Smith received his Bachelor of Arts degree from San Jose State University in Social Science, with double minors in Military Science and Physical Education. Tommie received his Masters Degree in Sociology from Goddard Cambridge in Boston, MA. As a college student, Tommie amazingly tied or broke a total of 13 world records in track. During the historic 19th Olympiad held in Mexico City in the summer of 1968, Tommie Smith broke the world and Olympic records with a time of 19.83 seconds and became the 200-meter Olympic champion. As he and John Carlos stood on the victory podium, draped with their Olympic medals. Each man raised a clinched fist covered in a black leather glove, in a historic stand for black power, liberation and solidarity. This courageous, unexpected worldwide event propelled Tommie Smith into the spotlight as a human rights spokesman, activist, and symbol of African American pride at home and abroad. Dr. Smith's courageous leadership, talent, and activisim have earned him well-deserved acclaim and athletic and humanitarian awards. Some highlights include: 1978 inductee into the National Track & Field Hall of Fame; 1996 inductee into the California Black Sports Hall of Fame; May 1999 inductee into the Bay Area Hall of Fame; November 1999 inductee into the San Jose State University Sports Hall of Fame; 1999 Sportsman of the Millennium Award; 2000-2001 Commendation, Recognition, and Proclamation Awards from the County of Los Angeles and the State of Texas; and 2004 dedication of the Tommie Smith gymnasium in Saint-Ouen, France. In May 2005, Smith was awarded the Honorary Doctorate Degree of Humane Letters from San Jose State University. Tommie Smith has enjoyed a distinguished 40-year career as a coach, educator, athletic director and activitist.