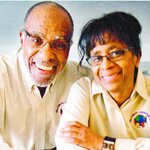 If I can help somebody as I travel on. Then my living will not be in vain. This is the philosophy lived out in the lives of Virginia and Frazier Mathis. If you were to follow their footprints it would take you around the globe in witness of two ordinary people doing extra ordinary work to build humanity.Frazier was the oldest of eight siblings. They made their home in New Orleans. The spirit of the city was not lost on the family. As a family they made their contribution to the party atmosphere. Even today, if you catch Frazier at the right moment, you can still see the party boy as he remembers fondly the dancing and edibles like stuffed pork chops. Virginia, on the other hand, often found herself at church where there was no dancing or pork chops present. She grew up in a warm Christian home. One of 5 siblings. Her father seemed to always be helping someone, and her mother loved children. The family made their home at times in New York City and other times in Pine Forge, Pennsylvania where she would graduate from her beloved Pine Forge Academy. As a child Frazier’s mother taught him how to work with his hands. As an adult he would make a career out of building things from the ground up. Virginia, with her fathers constant helping of others and her mothers love of children her very DNA would lead her to become an educator. These two vessels would eventually come together in union as husband and wife. Eight years later they would give birth to Global Vessels leaving footprints in ways they never would have anticipated. One year in preparing some of her students to go on a mission trip Virginia asked Frazier if he would like to go. He would accompany them on a trip to the Dominican Republic. What would follow next in the path of these two individuals is an example of organic humanity at its best. They were first conscious of the needs of others. They then looked at themselves and determined how they could help. Being a builder Frazier wanted to build. As an educator and with a strong love for children Virginia said ‘If you come up with a plan, I will help you’. Since 1998 these two individuals have exemplified the true meaning of neighbor, with the creation of Global Vessels. In several countries on the continent of Africa, the Mathis’ through Global Vessels have successfully completed many building projects, including a library, churches, dormitories, and a clinic. Their most shining light is found in what they started building in 2005. Havilah Children’s Orphanage . Located in Tanzania this is a gated community currently with four houses that serve as home to children who were without one. This is a placed where they are cared for, clothed, fed and educated. In an effort to teach the children of Havilah how to give back. Frazier asked them to take the clothes they were no longer wearing and prepare to go into the village and give them away….As they were returning from their day of giving away clothes. One young man missed out on receiving and decided to run after the truck in hopes that there might be one more item of clothing to be had. Although they had given away all the clothes, one young five year old decided there was more to be given. He stood up, took off his shirt and gave it to the person in need as had once been given to him. The best way to multiply your footprints is to help someone and watch that person do the same. Then your living will not be in vain.