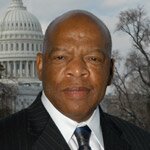 A small world, a safe world is what John thought he was born into. One day he would step outside of that world and walk with the wind leaving his footprints on the world. John Lewis the 'Boy from Troy' was the third son born to Eddie and Willie Mae Lewis. He did not realize how dirt poor they were. In this very small section of Alabama he was surrounded by family and friends. There were no strangers. His childhood was a rich and happy one. He was free from the weight of racism. Until the age of six, he had only seen two white people in the flesh…the mailman and a traveling salesman…. He began his education in a separate and unequal one room school. The only government money the school received went to pay the salary of the teacher who taught three grades. In spite of sub par conditions he loved school. He was hungry for education and his parents knew the importance of education. However, for a young black child, the school year was dictated by the rhythms of the farm. They went to school when there was not work to be done. Although he resented the interruption in his education, it was on the farm that he found his voice and an unusual group of listeners. He wanted to preach! Like all preachers he needed a congregation. So he enlisted the help of the chickens. In addition to laying eggs, they listened to him as he would practice his preaching. They gave him their undivided attention. Years later as a member of Congress, he would not be so lucky. In 1957, He graduated from high school and entered the American Baptist Theological Seminary. During his first year in seminary he became attracted to this social gospel that was being preached most notably by Martin Luther King Jr. Not every theologian agreed with King or his message. But for John, his steps were being ordered. With the Little Rock Nine in the news he tried to start an NAACP chapter on his campus. Unsuccessful he than turned his attention to integrating Troy State University. After his application was ignored, he wrote a letter to Dr. King and was granted a meeting. This would not be the only time he would meet with Dr. King. He returned to The American Baptist Theological Seminary in the fall, and fully immersed himself in the civil rights movement. He became a leader in SNCC, participated in sit- ins, bus boycotts, freedom rides and other non- violent protest. Marching however, would come to be his invitation to history. On March 7, 1965 John Lewis along with Hosea Williams attempted to lead a group in protest, from Selma to Montgomery Alabama. The group of many included teenagers, teachers, beauticians and other ordinary people desiring to leave their footprints on the world. As they walked across the Edmund Pettus Bridge, they came across a small army of white men equipped with hard hats and clubs in their hands. Their tongues were silent but their faces spoke. They continued walking. At the bottom of the bridge there was a sea of blue uniformed state troopers ready for battle, some on foot others on horseback. Armed with guns and clubs the size of baseball bats. All spectacles need cheerleaders and this one did not disappoint. Providing the soundtrack and encouragement for what was about to happen, was a group of white people laughing, hollering and waving confederate flags. What followed would become known as Bloody Sunday; John Lewis continues to walk to this day. A close look at his footprints reveals one of this country's darkest hours. It also reveals the life of a man who has continued to walk into triumph. For over 24 years he has served this country as a member of congress representing Georgia's 5th district. He continues to lead a regular pilgrimage to Alabama commemorating Bloody Sunday. He never saw a difference between being a pastor, activism or politics. It is all part of his ministry. He believes in the dignity of every human being. He believes in non violence as a way of life. He believes there has been a change and for those who do not believe, he invites you to come and walk in his shoes.