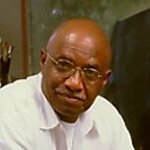 Artist/Presidential Portrait Artist
SIMMIE KNOX is a celebrated African American painter who earned his place in history as the first black artist chosen to paint the official White House portrait of former United States President Bill Clinton and First Lady Hillary Clinton. His oil painting of former President Clinton was unveiled during a ceremony at the White House. A graduate of Tyler School of Art at Temple University (BFA, Magna Cum Laude, MFA) in Philadelphia, PA, Knox as an artist has specialized in oil portraiture since 1981. Prior to that, he taught at various colleges, universities, and public schools in Delaware, Pennsylvania, Maryland, and Washington, DC. During the 1970's, Simmie exhibited as an abstract artist and worked for the Museum of African Art in Washington, DC. In 1971, he participated in the Thirty-Second Biennial of Contemporary American Painting at the Corcoran Gallery of Art in Washington with his abstract art. Simmie Knox turned to portraiture after years of painting a wide variety of paintings because he found that there is nothing more challenging and interesting to paint than the human face. He believes that a good portrait is the most difficult thing for an artist to complete successfully, because one must get an accurate likeness and create a good painting. Somehow you must communicate a subject's character, spirit, and personality; and everything must speak the energy of the subject. Simmie has been commissioned by private individuals, organizations, and institutions and has painted portraits of U.S. Supreme Court Justices, a U.S. cabinet member, U.S. congressmen and state senators, a mayor of New York City, respected civic leaders, sports figures, entertainment celebrities, educators, judges, religious leaders, military officers, businessmen, and private individuals.