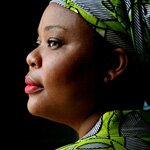 Peace Activist
We are called to be a light to the world. Leymah Gbowee has allowed her light to shine, although at times it was a smoldering wick. It yet was strong enough to stop a war. Leymah grew up in Liberia. She was one of five girls born to her mother and father. Her father spoiled each of them rotten. Her mother was disciplined and saw to it that Leymah and her sisters were also disciplined. 'She taught us feminism 101' Leymah asserts,. We had to learn to fight and do everything that boys could do. Leymah had a very happy childhood. She was a child of the community. Kids could eat at any and every home. When they played late into the evening, whatever house they found themselves the mother would feed and bath any child around. Growing up in a Lutheran home she served as an alter girl for many years in her local community. She learned about Jesus Christ the 'Prince of Peace.' Years later, she herself would be an agent of peace in her beloved country of Liberia. It is an unfortunate truth that the consequences of inhumanity live on far beyond the act itself. We need to look no further than Liberia as an example. In 1847 a group of freed and escaped slaves returned to the west coast of Africa and founded the country of Liberia. For over a century the descendants of these former slaves formed an elite class that dominated the indigenous ethnic groups. Those who were once oppressed were now the oppressors. On Christmas Eve in 1989, tensions between the two groups erupted into an all out civil war. Boys as young as nine were kidnapped and made to fight and commit acts of inhumanity to their own families. Rape was a weapon of war. Arms and legs were hacked off. Shooting was an all too common occurrence. It was hell on earth. Death, at one point, was better than life. Leymah accepted her status as a victim. She went around feeling sorry for herself. She refused to go to college or invest in her life. She did not see the point of doing so. As a young 20 something, Leymah started working with disabled women from Sierra Leone and Liberia. These women all had tragic war stories that defied human understanding. Oddly, they also had hope. They actively made plans for when the war was over. 'Why are you people so optimistic about life?' Leymah asked. 'Because we believe, as mothers we are the ones who can change everything' the women responded. One night, Leymah had a dream. The voice in the dream told her to get the women of Liberia together and pray for peace. This was an odd request Leymah thought. She saw herself as the wrong person for God to be asking to do this. She was not a 100 percent Holy Ghost filled Christian. She had several kids and no husband. In church she couldn't even old an office because of her lifestyle. 'I just wasn't living right!!' As Leymah continued to express her reluctance to lead. The women reminded her that if God could use a prostitute he could use anyone. They started the 'Christians Women's Peace initiative.' This included women from all the Christian Churches and Muslims coming together to pray for peace. Everyday they put on their white t-shirts and took to the streets. By 2002 over 200.000 people had died. 1 out of every 3 people had been displaced. The women decided to up their game. They used one of the oldest tactics in the book: No peace, no sex. With Leymahs leadership, the women continued to make their presence known. They grew in confidence, strength and in numbers. President Charles Taylor finally met with the women. Leymah made an impassioned plea for peace. Feeling pressured, president Taylor agreed to start peace talks. The peace talks were going nowhere so the women decided to go to Ghana, where the talks were being held, and continue the pressure. Their presence was not received well. They staged a sit-in, preventing delegates from leaving the conference hall until an agreement of peace had been achieved. They kept the men in the room without food or water so they too could see how the people of Liberia were feeling. In an act of anger one of the delegates came out and attempted to attack Leymah. Disgraced and enraged, Leymah stood up, greeting his anger with her own. She began to strip naked, the highest act of indignation. 'I decided to give him something that he thought he was taking away.' Although her actions caused mayhem. The men shamefully retreated and continued the peace talks. In a country where fifty percent of the women had been raped it was hard to understand how one striping naked could cause such discomfort. The United Nations was sent to restore order to the country. When they experienced resistance they called upon the women of Liberia, and they did not disappoint. Eventually President Charles Taylor was toppled from power and banished from Liberia. The country than elected Madam Ellen Johnson Sirleaf, the first women president in Africa. Led by Leymah, these ordinary women had an extraordinary impact on history. Their story is captured in the documentary 'Pray the Devil Back to Hell,' seen on PBS and the winner of several awards including best documentary at the Tribeca Film Festival. Leymah was asked how do you see the world today. 'I think the world is upside down, I think the maker of the world must be sad seeing how much harm His most intelligent of creations have done. Wrong is acceptable and righteousness is frowned upon.' She hopes that their actions in Liberia will inspire others to have faith that good can overcome evil. She lives in Accra, Ghana and is the mother six children. We celebrate you, Leymah Gbowee, for speaking Truth to Power! By disrobing inhumanity you have dressed the world with peace!