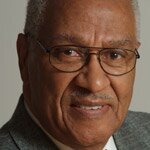 Spiritual Leader
Although born one year after the depression, Charles D. Brooks was born a rich man. He was born into a healthy family with an abundance of every thing one would need in order to grow up and change the world. Charles describes his father as a man with a third grade education who was well known and respected by all around. He was a hard working man. Good to his wife and children. Charles describes his mother as a saint. She was the spiritual beacon of the family. He never heard her say an unkind word or try to get back at someone. The family was Methodist; the mother came from a history of Methodist preachers. It was their habit to be in church on Sunday mornings, both parents, seven girls and four boys. At the age of six Charles witnessed his first miracle. His mother was taken to the hospital. She was very ill. They were told that she would not survive. While still in the hospital she had a vision. A voice called her by name 'Mattie…..Keep my commandments, I want a living sacrifice.' A few days later her health was restored and she was at home contemplating this vision she experienced. Through further revelation it was revealed to her that she was not keeping the fourth commandment. After prayer and further study she along with the 11 children began keeping the seventh day Sabbath. They had never heard of Sabbath keepers and did not know of a church that did so, they kept the Sabbath all by themselves. Years later, a door to door book salesman would come to their home and introduce them to the Seventh Day Adventist Church. A denomination he would later serve as a spiritual compass. His mothers' example, dancing through her son. This news was not received well by their local church and it certainly did not work with their father. Saturday was a working day and he needed the children to work. In conflict, Charles says, his mothers wisdom lyrically rose above the human confusion. She said to the children 'Yes the bible does state do not work on the Sabbath….but it also says honor thy mother and thy father.' Growing up in Greensboro, North Carolina, He was always conscious of race relations. Charles had a white friend by the name of Frank Loving. They were both 15 years old and 16 was approaching rapidly. A black man came to Charles and explained to him that because he was getting older he needed to begin referring to his white friend as 'Mr.' Charles did not speak the new title and he and Frank began to drift apart. Years later he would meet Frank as an adult. Warmth was not to be found in that meeting. Describing himself as a worldly teenager, Charles was adamant that he would not become a pastor; he was to become a dentist. In 1947 this worldly teenager, now adamant against being a dentist, enrolled in Oakwood College as a Theology major. For the next 20 years he pastured in various churches eventually becoming the General Field Secretary for the General Conference of Seventh Day Adventist in 1971. However it was in 1974 that he would be placed in a position that would propel his voice around the globe. Pastor Walter Arties founded the television program Breath of Life. Charles Brooks would be the first speaker and director. Until his retirement in 1996, Charles would enter into peoples homes through their television sets, and he would travel across the United States and various countries speaking truth to power. During the long hot summer of urban race rioting in 1964, Charles would defy a request from the mayor of Philadelphia to shut down his meetings. He believed good could overcome evil. 'Inhumanity is a perpetual problem. The solution starts with a change of heart.' For over 60 years Charles has changed the world with his presence. He embodies a grace that is immediately infectious and transforming to all those around. He has received an honorary doctoral degree from Andrews University. In 1994 he was inducted in the Martin Luther King Jr Board of Preachers and Collegium of Scholars at Morehouse College. He currently is a part of and namesake patron for the Bradford-Cleveland-Brooks Leadership Center on the campus of his beloved Oakwood University in Huntsville Alabama. He lives in Laurel, Maryland and is married to Walterene Brooks. They are the parents of two. We celebrate you Charles Brooks for speaking Truth to Power! In a world in search of peace, love, and light you have shown us that it is in our very breath that we find life.