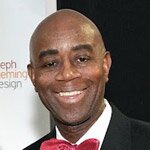 By Markus Williams
The story of Barry Black is truly the story of one of Gods Chillun graced with traveling shoes. Although his beginning had very little promise, he is able to look back and see, at every step along the way from the hood to the hill; that is when he was blessed.

He was born in the ghettos of Baltimore, Maryland, an environment he describes as toxic and dangerous. In the midst of this, he was blessed to be in a cocoon, sheltered from that toxic environment. He was fond of his seven siblings that included five sisters and two brothers. He also had a supportive church family and neighborhood friends. There was however no light that was brighter than that of his mother Pearline Bull Black. She was the light that illuminated the family and guided their ship. A deeply spiritual person, she would worship with them every day. His mother shared with them an optimism about life and imparted her strong work ethic. These gifts Barry would receive and they would accompany him on his journey.
His gift of oration would reveal itself very early. At eight years of age he started memorizing sermons, Shakespeare and other famous speeches. He began to understand the power of words and his gift of delivering them.

He lived in a segregated world. He would live 16 years before he would shake the hand of a white person. Prior to that the only time he saw a white person was when the white males came into their neighborhood with the purpose of employing young black women for a few minutes of their time. The men would just honk their horns announcing what they were looking for. The neighborhood would come to know them as just “Honkies”.

Barry along with all of his siblings graduated from private Christian schools. This was not an easy achievement with an absent father and a mother working the best jobs she could find. During this process of growing up and going through school he was cradled in the arms of people who would help him develop wings. His church community recognized his talents and potential and encouraged him with the many possibilities of what he could become. He would come to believe in their faith in his future. Often times people would help by giving money or allowing him to do odd jobs to earn money. He was gaining an understanding of what it means to be thy brother’s keeper.

After graduating from seminary the young Barry served as the pastor of eight Seventh Day Adventist churches simultaneously. He was dedicated to his work and it was great preparation for what would become his life’s work in a pluralistic environment. He soon learned of the need for Seventh Day Adventist Chaplains in the Navy. He made a career change and found himself at home. He had at times before felt as a misfit in the SDA church. He was expressive in his worship. That did not always sit well with the conservative religion. He was told not express himself in that manner. He also found value in connecting with other believers. Not just “witnessing” to them but worshiping alongside them. He was comfortable working outside of his religion, talking and finding common ground with people from all walks of life, with a myriad of beliefs.
From 1976-2003, Barry Black served in the United states Navy quickly rising to Rear Admiral and retiring in 2003 as Chief of Chaplains. Throughout his career with his traveling shoes laced up, his steps have been ordered. Even in the bad times there were blessings in his affliction. As he was approaching retirement from the Navy he was unaware of the crescendo that was about to happen. After years of being in the right place at the right time he was invited into the office of Dr. Lloyd Ogilvie. An office he had visited before and a person he had come to know, love and respect.

This meeting would be different. It gave him his wings to soar into the position of Chaplain of the United States Senate, A position that was granted to him by vote.  He is the first African American to serve in this position. For a person who is comfortable in an environment with people of multiple faiths and beliefs there is probably no greater place for the gifts of Barry Black than as spiritual leader in the Nation’s Capital. He believes in being a voice for the voiceless. He believes in removing the obstacles of justice. If there is no justice there is no peace.  He believes the best way to create change is good one on one dialogue where listening and hearing is present.

The Story of Barry Black is captured in the book “From the Hood to the Hill”. He is married to Brenda Pearsall Black and they are the parents of three boys Barry II, Brendan, and Bradford.

We celebrate you this evening Barry Black for being the keeper of your brother and sister, For preaching the wide opened arms of God, for reminding us that at every step of the way, We are blessed.
**************
Please welcome Living Legends Honoree Barry Black