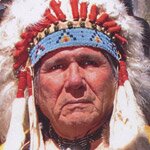 By Markus Williams
The life of Dennis Banks is a representation of both the tragic and the triumph of this country. He was born in a country where his people were dispossessed. He survived the genocide of his people and along the way found his voice. He had to be heard.

He was born in Northern Minnesota on the Leech Lake Indian Reservation. He is from the tribe Anishinabe meaning “First or “Original People”. In the Ojibwe language his name is “Nowa Cumig” meaning “in the center of the ground”. His life journey would one day lead him to the center of a standoff between Indian activist and United States Government.

Dennis has very strong memories of his childhood. His parents, grandparents and members of the wider community completed his world. In hindsight that world would only last for a brief moment. Four years. The government decided that it would be best to create religious and military boarding schools to teach the Indian children the American ways, which were widely, understood as superior to tribal ways. Without the approval of his parents Dennis was taken away at the young age of four. His boarding school was 350 miles away from home. He repeatedly ran away from these schools and he was repeatedly brought back and beaten. At the age of 15 he was finally successful in running away for good. His voice was emerging.
He began to read and learn about his people and by the time he entered adulthood he was well aware of his identity. After four years of active duty in the Air Force, he left as it no longer agreed with his philosophy.
After leaving the military he was greeted with a life of poverty and limited opportunities. One night, hungry and desperately wanting to provide for his family, Dennis broke into a grocery store for food. Upon returning home he gleefully told his family they were having steak for dinner. In the middle of that very steak dinner a knock came at the door. It was the police. They had followed his car tracks in the snow. This began his prison career. In prison he would come to understand the suffering of his people and the weight it carried.
In 1968, within days of being released from prison, Dennis went door to door asking people to come out and join what would become known as “AIM” The American Indian Movement.  Inspired by the black power movement, they spoke out against racism, poverty, lack of jobs, and Indian rights. Over the next several years “AIM” would be responsible for raising the consciousness of the American people.

In the spring of 1973 a white man, who murdered an Indian man, was given a sentence that did not reflect the significance of his crime. Once again, Dennis and his people found themselves asking to be seen as human beings.  They demanded justice but it was denied. After years of being under a systematic attack they embarked on an armed takeover of the village of “Wounded Knee” on the Pine Ridge Indian reservation in South Dakota. They were soon surrounded by an army that included the U.S. Army, the FBI, the Bureau of Indian Affairs, U.S. Marshals and state police. The Indian protestors were fired on first. What followed was a standoff that lasted 73 days and would become known as the “The Battle of Wounded Knee”. It was the very site that saw the “Massacre of Wounded Knee” 83 years earlier where over 300 Indian men women and children were killed.
The courage of “AIM” in the spring of 1973, grabbed the attention of people throughout the world. They began to receive the support of people responding to their struggle.

Although he does not live with regrets, in subsequent years Dennis has spoken of his desire to present himself as a kinder gentler Indian rights activist. In 1980 he witnessed the birth of one of his 20 children. After this experience he said “Everyone should witness life, then they won’t want to harm life”.  He continues his work in educating his native country that his life and the lives of all Native Americans and all people are equally important. We are All Gods Chillun and we are our brothers and sisters keeper.

His life story is captured in the book 2005 book “Ojibwa Warrior”. He is also the subject the award winning 2010 documentary “A Good Day to Die”.

After reversing his own diabetes through diet and walking. Dennis has become the driving force in leading walks around the country and around the world reversing diabetes and bringing messages of peace, hope and unity along the way.

We celebrate you this evening Dennis Banks. Perhaps no group in history has had to yell as loud and as long, in an effort to be heard. You have given voice to what it means to be a child of God.