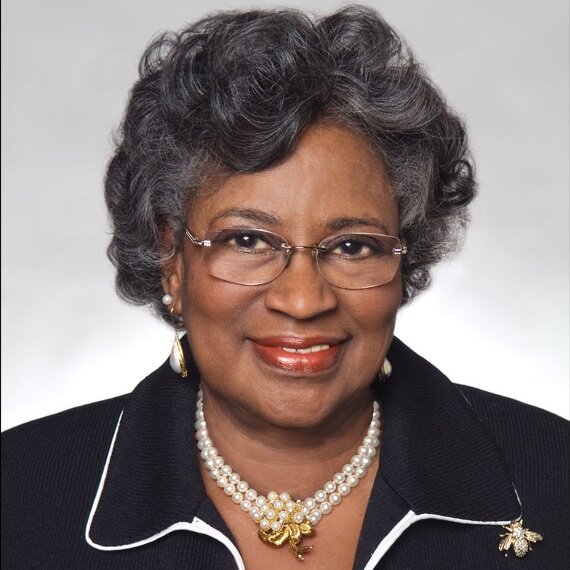 Juanita Abernathy was raised in a time when women were seen and not heard. Women had their place and they were to stay in it... "Thus saith the Lord"... But Juanita had a strength that would not be shattered even in the midst of life's explosions.

She was born in Uniontown, Alabama to a farmer and a homemaker. She was one of eight children born to this religious family. Her father was very active in the Baptist Church. Independence in thought and action were qualities taught to all eight children. They were to speak out when it was right to do so. They had a moral responsibility to not allow silence to be the victor.

Juanita was conscious of racism all her life. She would watch as the school bus passed her farm to pick up the little white children next door. Her parents determined that they would not let these circumstances prevent them from educating their daughter so they sent her to a private Baptist boarding school.

On graduation, Juanita entered Tennessee State University where she studied Business and Education. While there, she determined that she did not want to be poor and to Juanita that meant not marrying a preacher. Then she met a young man by the name of Ralph Abernathy, he would become her first boyfriend and later her husband. His congregation would come to know him as Reverend Ralph Abernathy and she would become a part of the very backbone of what we now know as the Civil Rights Movement.

Juanita became a teacher and despite the objection of her boss she began her work with the NAACP. She was very active in the movement and was often found organizing for the Freedom Riders. She made sure they were properly housed and fed. Juanita's family was frequently the recipients of death threats, police surveillance and wiretapping. After a New York reporter investigated a phoned in death threat, the retaliation was swift. The police called Juanita to remind her of how far-reaching their power was.

One morning as her husband Ralph Abernathy and Martin Luther King Jr. were preparing to leave for the airport as they had done many times before, Juanita answered the phone. Although they had received death threats before there was something different about this one. Unbeknownst to her tears were streaming down her face. She was now pregnant and had a toddler in hand. Ralph and Martin attempted to find out what had upset her. Ignoring the uneasy feeling in her being she insisted that they should take their trip as planned, assuring them that she would be fine.

At 2am, while Juanita and her children were peacefully sleeping. A bomb blast shattered the quiet night, blowing away part of her home. The power of the explosion was felt blocks away summoning her neighbors to her aid. This would be one of six bombs that exploded that night, another bomb had targeted their church. The police arrived quickly; they had foreknowledge of the bombing. They attempted to rope off the house to prevent people from entering and seeing the damage. Juanita Abernathy refused to allow the police to hide the damage in shame. She wanted all to see the destruction that humans had done.

The bomb went off inches from their gas line, any closer they would have joined the chorus of those who have gone before. Juanita notes that the bomb was so powerful it removed parts of her house, blew out windows and had objects falling all over. However, the room where she slept was a sacred haven. In the confines of this space they were spared the full wrath of the bomb. No objects fell, the baby was not even awakened.

We celebrate you Juanita Abernathy. Your courage, conviction and obedience to your moral responsibility is the prize of the human symphony, a prize that is now seen and heard.